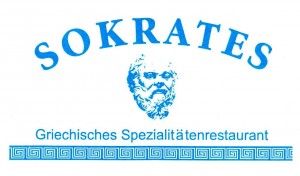 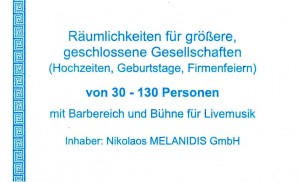 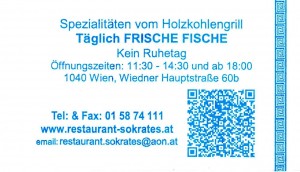 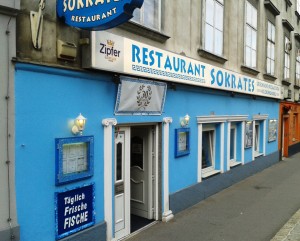 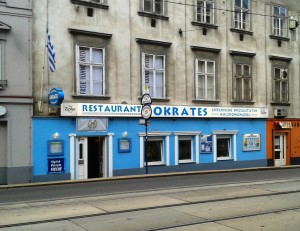 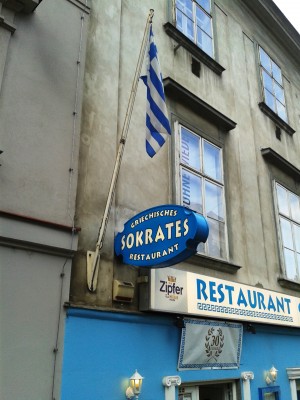 Being already three days in Vienna was more than enough to take a small taste of Austrian air...but when it comes to food you need something more than that,you need culture,and so we were lucky enough ,after our visit at the Karlsplatz, to find the Greek restaurant out of nowhere like an abandoned island in the mediterranean. Anyways we entered the place and we immediately noticed the facade of Sokrates hanging on the opposite wall with a huge number 30 below him noting the 30 years of the restaurant,we where very quickly greeted by the waiter and the bar-woman and really quickly placed to our table...it was like they were expecting us or smthing. the decoration was extra ordinary,you could feel like you are in a greek island,mostly because of the funny looking greekstyled chairs but they were ok.We werent given enough time to decide what we wanted but hopefully we are experienced with the greek cousine.We all ordered greek wine ofcourse and a huge variety of appetizers and grills except me,i really wanted to try this Gyros with the metaxa-sauce.We were given the appetizers first even though we wanted everything together but that wasnt a big deal the waiter was very warm friendly and professional so was all the personal actually and finally when the main course arrived we ate like there was no tomorrow...everything was amazing the grill skewers werent dry the garnish was plenty( perhaps some extra tzatziki with the Alexander-Platte would be great) and all that with the sweet greek 70s 80s music....If we ever come again to Vienna we would definetely visit Sokrates again 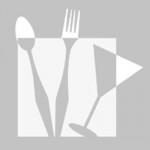